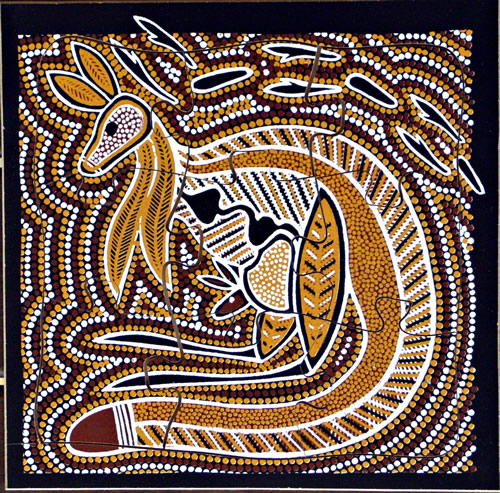 Art by, and Dreaming Story retold by Charlie Chambers Jnr.

Back in the Dreamtime, there was a group of Aboriginal tribes having a corroboree around the campfire. Enjoying themselves, they didn’t notice that they were being watched by someone hiding in the bushes. This fellow was enjoying the music so much that he joined in the corroboree. When he joined in dancing, he became excited and started hopping around the fire. The more excited he became, the faster he would hop around. Suddenly he started to change form; his arms became smaller, his legs became bigger and he grew a long tail to balance him as he hopped around. This person can still be seen today - he is known as the Kangaroo.

Suggestions for Activities:  * Organize to see an Aboriginal dance performance, live or on video, and discuss the story telling and cultural importance of dance.

Notes:* Dot painting, cross-hatching and the X-ray style, showing bones and intestines, are 3 techniques used by Aboriginal tribes in Australia. Different tribes use different styles, just as different Western artists in different countries do. The Dreamtime stories in this series come from the old people in the community who use them to explain how the animals. plants and people came to be, at the beginning of time, or the Dreamtime.