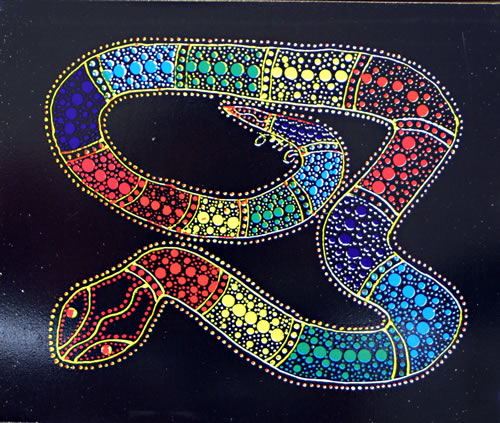 Artwork and Dreaming Story retold by Donna Hensen, of the Wiradjuri people

Every Aboriginal tribe has a version of the Dreamtime story about the Rainbow Serpent.

The common theme is that back in the Dreamtime when Creation was just beginning, the Earth was flat, with no distinguishing features or landmarks. The beautiful and very colourful Rainbow Serpent who lived there decided to travel around Earth to spread colour. However, as he went, sharing his colour, the weight and size of him moved, squashed or broke parts of the Earth’s surface. Hills, mountains, valleys and deep holes were left in his trail. When the rains started, the big holes were filled with water. Small cracks became rivers, and everywhere there was colour. Because of all of the changes to Earth, the Rainbow Serpent couldn’t find his way back home. He found a very large waterhole, and went to sleep in it. Now, after each rain, you can see him, arched up across the sky, trying to find his way home.

Draw your own Aboriginal-style picture of the Rainbow Serpent

Discuss the story and how Dreaming stories may explain how the Rainbow Serpent may have made landmarks in your own area, such as hills or rivers.