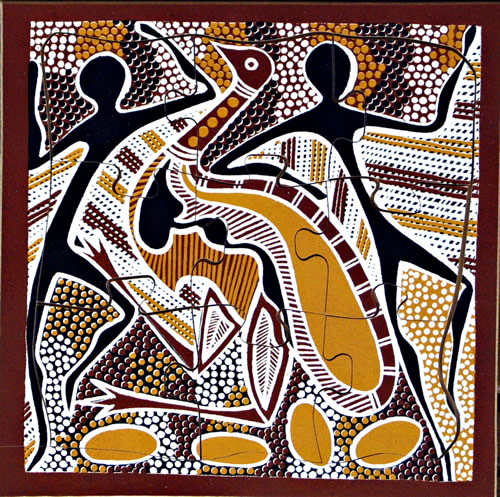 Art by and Dreaming Story retold by Charlie Chambers, Jnr

The men of the Dingo Totem wanted the Emu Sisters for wives. The Emus didn’t want to marry the Dingoes, and flew away, as in those days, Emus had full size wings and short legs. The sisters made their home under some boulders and rocks. The Dingoes finally found the Emus, but couldn’t entice them out. The Dingoes then made a fire, knowing it would force them out. As the sisters tried to escape, flames scorched their wings so they could no longer fly. However, as they stepped over the burning grass and bushes, their legs grew longer to protect their bodies from the flames. They managed to escape the fire, but the Dingo men still chased them. The Emus grew tired of running and eventually rose up into the sky, where they changed into a group of 7 stars, and are still known today as the Seven Sisters.

·          Set up an Aboriginal Corner, to display and encourage discussion about Aboriginal artifacts and information, as well as your own Aboriginal style crafts and artwork.

·          The large flightless emu is a special animal for the Aboriginal people of Australia. Aborigines would hunt for emus, and they would use all of the bird. The meat and eggs would be eaten, feathers used for ceremonial dances, the oil (portrayed in this puzzle as the large, yellow patch in its body) used as a medicinal rub, and the skin used for clothing. In some parts of Australia, the emu is a totem, and therefore, a sacred bird that had to be protected and cared for.

·          The artist, Charlie Chambers, Jnr was born at Cherbourg in Queensland and was taught to draw by his father. Charlie’s Aboriginal tribal heritage is Kiullill and Kookimijii. Charlie does storytelling in schools and the community in an effort to pass on Aboriginal stories and art to others. He is a renown artist, whose paintings are on display around Queensland, (including a 2.5 metre long mural in the foyer of the QE11 Hospital in Brisbane) and also overseas.