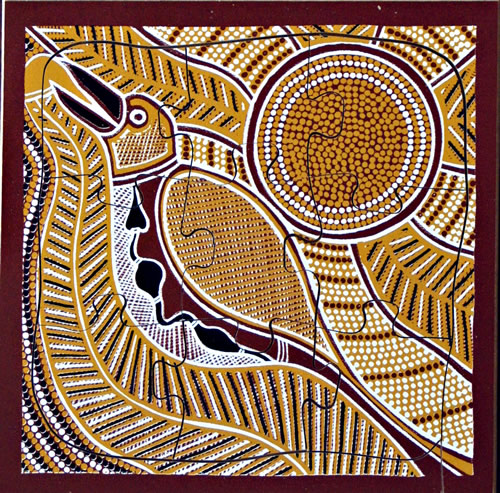 Back in the Dreamtime, there was a man named Ga Ga, who liked to play tricks. He would go out with the hunting groups, and, at night, when the hunters were asleep, Ga Ga would hide their weapons under shrubs and in trees. When the hunters would get up in the morning, ready to go hunting, they would become angry, because they couldn’t find their weapons. Ga Ga did this so often that, one time, the hunters told the elders of the tribe when they came back to camp. The elders had a talk to Ga Ga, but he did not listen and kept playing tricks. The elders finally sent Ga Ga away into the bush, never to return, and put a curse on him, turning him into Ga Ga the Kookaburra. Today, you can still hear Ga Ga when the sun comes up, laughing about the tricks he played on the hunters during the night.

*Discuss the features in the picture, such as the sun and Ga Ga’s laugh echoing out from his beak.

*Make up another story about Ga Ga and what other animal he could have been turned into.

*Make up funny stories about what Ga Ga might be calling out when he laughs in the mornings.

* Dot painting, cross-hatching and the X-ray style, showing bones and intestines, are 3 techniques used by Aboriginal tribes in Australia. Different tribes use different styles, just as different Western artists in different countries do. The Dreaming stories in this series come from the old people in the community who use them to explain how the animals, plants and people came to be, at the beginning of time, or the Dreamtime.

* The artist, Charlie Chambers Jnr. was born at Cherbourg in Queensland and was taught to draw by his father. Charlie does storytelling in schools and the community, in an effort to pass on Aboriginal stories and art to others. He is a renown artist, whose paintings are on display around Queensland, (including a 2.5 metre long mural in the foyer of the QE11 Hospital in Brisbane) and also overseas.